Our tour guide for the day was Minh and he shared some of his country’s history during the three hour long bus ride to Ha Long Bay. He talked about some of the bridges in Vietnam. There are two that were created by the same person who did the Eiffel Tower in Paris (sorry for the lack of photo but the bus was going too fast) and you can see the similarities between the two structures.
Also, Minh talked about how Vietnam’s Communist Government has evolved over time and how it’s impacted tourism in his country. When Vietnam first became a Communist society, the people all received an equal amount of coupons (not money). Each coupon was good for an equal share of items such as rice, vegetables, fruits and water. They also received coupons for soap, shampoo and clothing. Foreigners were not allowed to visit Vietnam and local citizens were not able to travel outside the country. Minh explained that if a citizen wanted to travel out of Vietnam, the government would want to know where that person was getting the funding to travel. No one had any money because no one was paid in cash, only in coupons. Citizens could travel to visit family within the country but first had to get permission from the government and they would provide the travel arrangements. Minh said that in theory, having everyone have the same of everything sounded ideal. However, there were flaws in the system. He went on to share the problems the system encountered. When people received their monthly coupons, sometimes there were items they couldn’t use. Men might receive a coupon for a pair of female underwear-not something every man could use. So the people would trade coupons with one another. Someone might trade a shampoo coupon for additional rice. Now everyone has a little more or less of each item and it’s not equal like the system had intended. Also, you received your coupons regardless of the work you did. You might have two people working in the rice field. One employee might be productive and hard working, but the other prefers to sit down in the shade and drink tea all day. That hard working employee might see the other employee sitting around and reading the newspaper and decide he wants longer breaks too. Productivity started to suffer. So Vietnam now has a free market in regards to business, but is a Communist society in other aspects. In terms of travel, foreigners are welcome to travel throughout the country and citizens can travel outside of Vietnam. More specifically, the USA lifted the embargo with Vietnam in 1994. This also happens to be the same year that Ha Long Bay became a UNESCO World Heritage Site.
Ha Long means descending dragon and there are over 1900 rocks or islands that stick out from the water. The weather in Hanoi and Ha Long was perfect because it was nice and cool. In Ha Long, there was some fog and clouds which added to the look and feel of the bay. When we arrived in Ha Long bay, we waited on the dock to board our boat.

Waiting to board our boat.

Once on board, you could sit inside the boat and watch the huge limestone rocks go by or come face to face with the rocks up on the top deck. 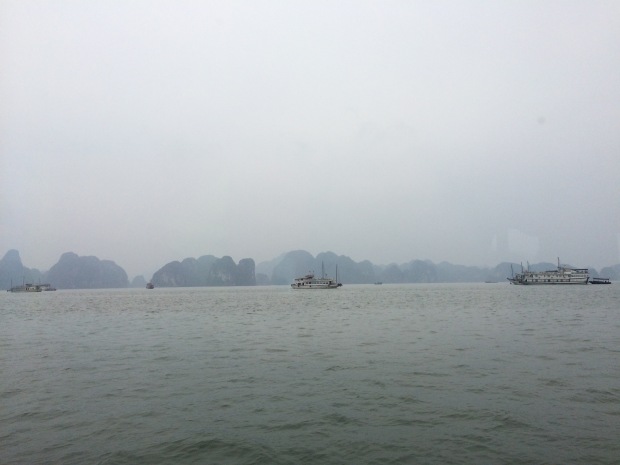 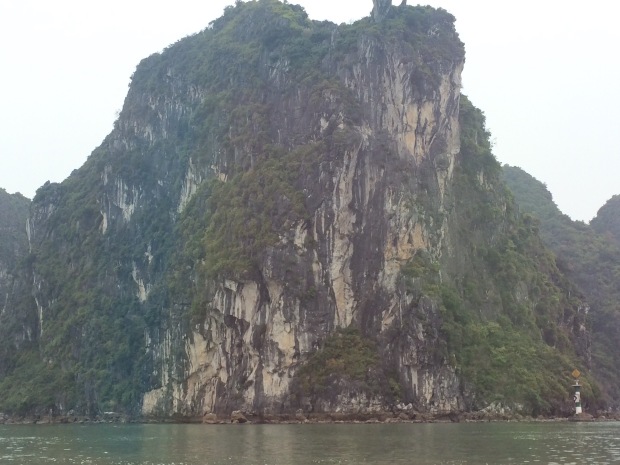 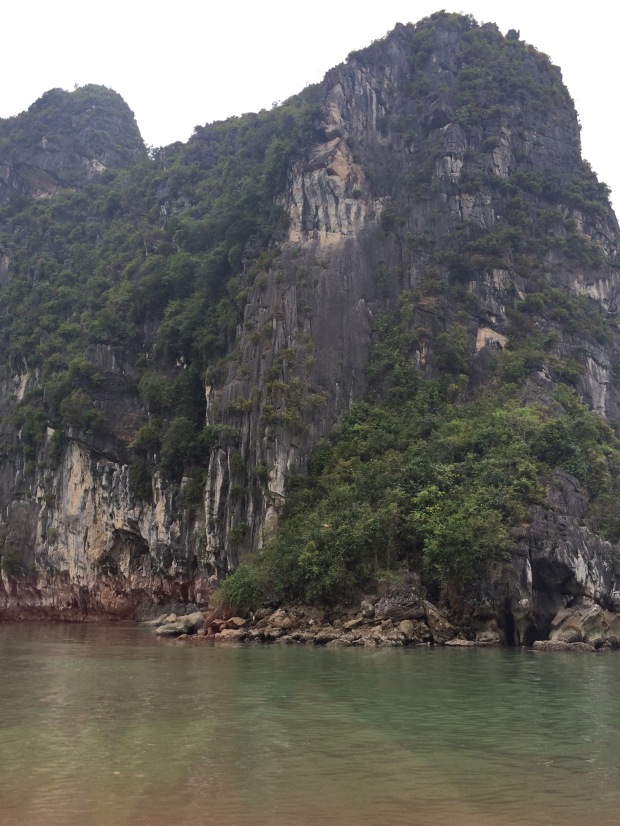 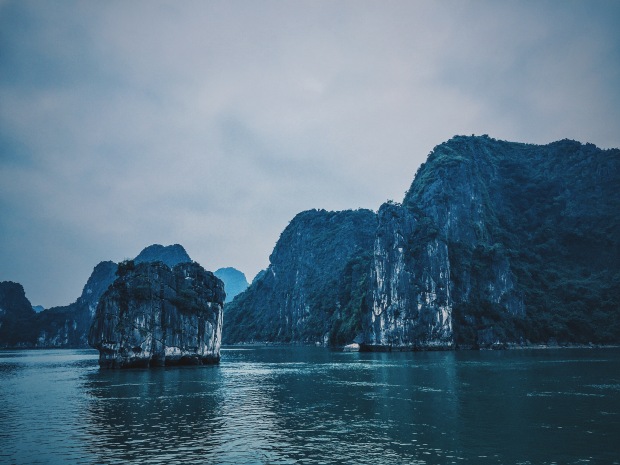 Ha Long is an ancient part of Vietnam full of villagers who survive from fishing and many live on riverboats like the one above.

These two rocks are the most famous of Ha Long Bay and are called the Kissing Rocks.
I loved watching a new rock formation come out of the fog and trying to figure out what each one looked like.

At one point the fog was so thick it felt like we were cruising into a wall of fog!

Part two of Ha Long Bay will include exploring the biggest cave I’ve ever seen.