Super Nel and I always enjoy exploring new countries. We have a few that are our favorites and if we could visit them every single year we would never get bored. I never expected Vietnam to become one of those countries. I fully expected to enjoy my time visiting this country but I didn’t expect to fall in love with the people and the culture. It was hard to leave one Vietnam city for the next one, but every time we did we always said the same thing: “We’ll be back.”
Our first stop in Vietnam was Hanoi and it did not disappoint. Our hotel, The Legacy, was kind enough to send a driver and I felt mighty fancy when I saw a gentleman holding a sign saying “Baluca.”
Our drive into the city was quiet. We saw green rice fields and there was fog rolling over all the green. Another plus about Hanoi? The temperatures were substantially cooler than in Bangkok.

My favorite part of the drive was going over this bridge. There are a few different bridges in Hanoi and one of them was designed by the same person who designed the Eiffel Tower.

Our hotel was located in the Old Quarter. Hanoi is broken up into different quarters and you can see it on the map when looking at the city. Upon arrival to our hotel, we were greeted by David, the front desk manager. When I say “greeted,” I mean he came over and sat at a table with us. He asked about our ride from the airport, where we were from, what we had planned in Hanoi and a lot more. David wasn’t the only one who showed this sense of intrigue to towards us. I noticed all the staff and even people on the street walk up to foreigners and strike up a conversation. I would later learn that this is how the people of Vietnam practice their English. It gives the the chance to perfect their conversational skills. I think it takes a sense of bravery to walk up to someone and start a conversation.
We had arrived in Hanoi pretty early, so David offered to let us go upstairs and enjoy the free breakfast while our room was being prepared. 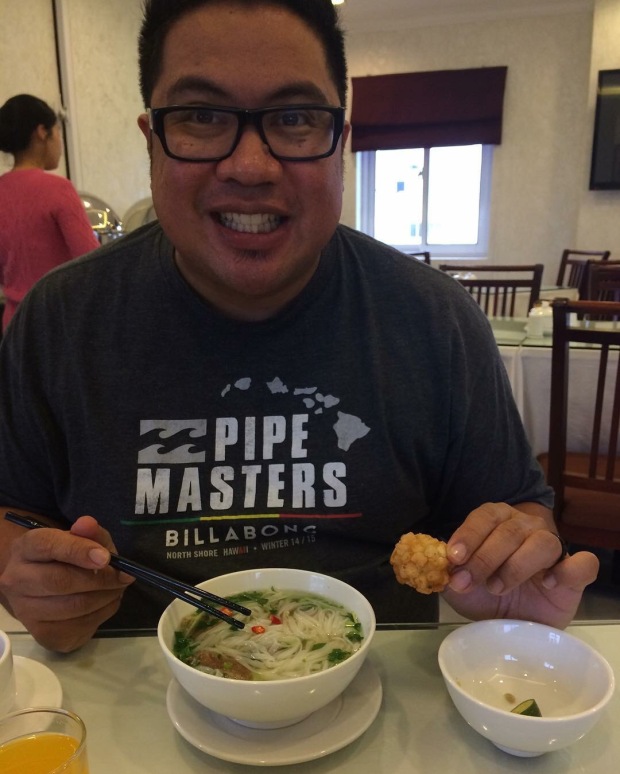 The best part of the free breakfast was the tasty pho soup and different noodles every day.

We booked a nighttime food walking tour for our first evening in Hanoi. We were excited to try some local food.
Our local guide, Hannah, picked us up from our hotel and another couple joined us-they were in town visiting from Montana.
At our first stop we tried four different rice dishes that came with a different sauce-the sauce options were ginger, green bean, black bean and the last one was a floating cake so instead of rice there was a ball in a sweet soup and the ball had a mochi like consistency. The floating cake was the majority favorite with the black bean sauce a close second. 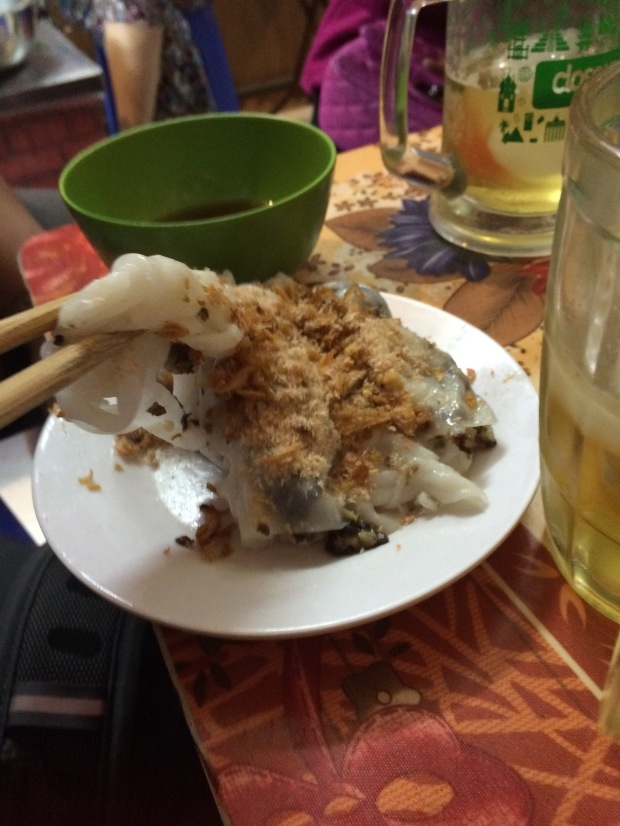 At our next stop, we enjoyed freshly made Banh Coun (see photo above). We watched a lady making rice paper very similar to how a crepe is made. She had a hot plate that she would add a small amount of liquid to (rice flour with water). Then using a small stick she flattens the liquid so that it cooks into a very thin see through pancake. Once finished making the rice paper, it is stuffed and rolled with a minced pork and mushroom mixture. It’s served with crispy fried shallots and a sauce for dipping called Nuoc Cham. It was so tasty we decided to savor each bite and enjoy a beer.
The next few stops included pho ga, fried pastry dough with pork mushroom, sweet potato dough with friend shrimp called banh tim ho tay and a vegetable dumpling. It’s safe to say our bellies were pretty stuffed after this much food. And we still had three more places to visit!!

Before taking us to get a fruit bowl for dessert we did some walking (thank goodness) around the city. Our first stop was at Hoan Kiem Lake. 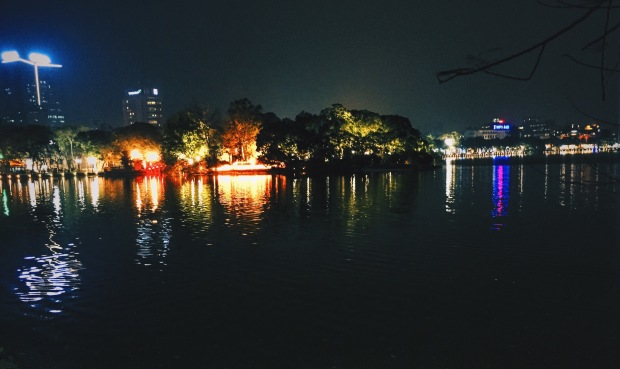 The history behind this lake is that Emperor Loi was given a magical sword during a revolt with Ming China. Later in 1428, while the Emperor was near the lake a turtle came and asked for the sword back. The Emperor, believing that this was his ancient ancestor, returned the sword and decided the name of the lake would be changed to Hoan Kiem Lake (Return sword lake). The lake felt pretty magical at night.

Next we passed by this church. Our tour guide explained that it is a Catholic Church build by the French when they occupied Vietnam. One of my favorite topics to discuss with locals is about religion or beliefs. I love learning about different religions. This can be a delicate subject to discuss but standing outside the church was the perfect time to ask respectful questions. Hannah told us that about 20% of the Vietnamese practice Christianity, a small amount practice Buddhism and the majority of the people follow Traditional Beliefs. Traditional Beliefs mean the people worship their ancestors and a variety of Gods. I wanted to sit down and talk more about this for hours, but it was time to eat dessert.

Our fruit bowl included mango, watermelon, dragonfruit, Asian pear, coconut, winter melon and avocado. It was mixed with coconut jelly and agar agar (gelatin). Then drizzled on top was a mix of condensed and coconut milk. You are given a bowl of crushed ice to add to the bowl and you mix everything together and devour. Mine didn’t last longer than two minutes before it was in my belly.

Our last two stops were two of my favorites. The first was to enjoy some egg coffee.

Egg coffee is prominent in Hanoi and we were really sad that we couldn’t find it in any other city in Vietnam (more reason to go back!) It’s a combination of egg yolk and coffee. The egg yolk gives the coffee a creme brûlée taste. You can get your coffee iced or hot and they were both delicious. We had one everyday we were on Hanoi. A slight warning: this coffee is strong! I’m really sensitive to caffeine so a few sips of egg coffee and I was ready to Go, Go, Go! There are numerous coffee houses throughout the city and its not uncommon to see locals gathered together drinking coffee and catching up on each other’s lives. The people of Vietnam are very social and enjoy one another’s company.

Our last stop was a visit to “Beer Corner.” It’s an area of Hanoi where locals gather for a beer at night.
I should probably share another important fact about Vietnam-crossing the street is an adventure in itself. It requires skill, finesse and a big pair of canjones. I’d read numerous blog posts before leaving home about Vietnam and one thing that is consistent is info about crossing the street. It’s like playing a life sized game of Frogger. Only if you get hit, you don’t regenerate another life, you break bones.

Our tour guide and all the other locals are natural pros at crossing the street. Our first few times, involved us waiting until a local was crossing and we would hover right next to them until they finished crossing. By the end of our time in Vietnam, we’d become pros. We could cross any street (running knees to chest) solo. You really have to mentally tell yourself repeatedly “They’re gonna stop. I won’t get hit. You can do this!”

Our first night in Vietnam was a complete success. Hannah had to roll us back like little balls to the hotel because we were completely stuffed. We couldn’t wait until the next day to visit Ha Long Bay. Our hotel staff greeted us on our return and they asked about our night, what we ate and our plans for the next day. It almost made us feel like we were staying with relatives instead of a hotel in a city far from home.

Up next I’ll share photos and stories from our day in Ha Long Bay-it’s said to be one of the greatest natural wonders of the world.